The OSU Triathlon Club has 6 coaches and a faculty advisor. These six extraordinary people graciously donate so much time out of their already busy lives to help the club and community. They all love to give back to the sport that is such a huge part of their lives. They are full of information and can help you with all of your multisport enquiries. Feel free to email them and chat with them at many of our club workouts!

The club would also like to thank you Nate, Taz, Kara, Blair, Staci and Erica because without you, we could not exist as a club! You have helped each and every one of us tremendously over the years and we can not begin to thank you enough!

"By the time I was 30, I had become an overweight alcoholic who drank and smoked to excess.  Then, for my 1986 New Year’s resolution, I resolved to change my lifestyle.  I quit drinking and smoking, and lost 65 pounds.  I had no previous athletic experience but needed an outlet for all of my newfound energy.

My first triathlon was a sprint and by the time I crossed the finish line, I was hooked.  In the 23 years since then I have competed in over a hundred triathlons of all distances.  I have finished 10 Ironman races and qualified for the Ironman World Championship four times.energy.  That’s when I started doing triathlons.

Wanting to give something back to the sport that saved my life, I became a coach for the OSU Triathlon Club.  Working with the student athletes has been one of the most rewarding activities of my life.  Through my company, T3 Triathlete Coaching, I also provide personal coaching to athletes of all levels.

My advice for having a great race: there are only two things in your control, giving it your best effort and having fun.  After that, everything else is out of your control, so don’t worry about it."

"Before my first triathlon, I was not a huge fan of the idea of running for fun, let alone doing it after swimming and biking. My Dad and a high school friend talked me into it (with some well placed trash talk). By the time I crossed the finish line I wanted to sign up for another one. I found the triathlon club when I came to OSU several years ago. Throughout my time as a student, I grew to take on leadership of the club and the races. My first time directing the Freezer was perhaps the largest influence on where myschooling would go and my career path after school Ihave competed in everything from 5k to 70.3 events. Highlights include a few appearances on the top of the podium, some top bike splits, and qualifying for team USA."

My advice for having a great race: "There will always be obstacles and challenges that are out of your control. If you can keep calm andadjust to the situation while giving it your all, then there are no bad races. You might not always finish where you want to, or have the times that you were aiming for, but the toughest races are the ones that bring the biggest lessons. This sport is about challenging ones self. Look at every situation as a new challenge; the bigger the challenge, the bigger the reward."

"I began running road races at the age of 9 inspired by the adventure of the Lilac Bloomsday road race in Spokane, WA.  My dad introduced me to the sport of triathlon and in 1986 I finished my first race at the age of 13.  I have competed in running, swimming, triathlons and cycling events ever since.

My coaching experience began in high school teaching swimming lessons and assistant coaching  with the Redmond Aquatic Club.  I continued teaching swim lessons and began a masters swim group  while attending college.  At Oregon State University I was a member and club president of the triathlon club while graduating with my BS in EXSS Pre-Physical Therapy.  In 2001 I graduated from Pacific University with a Masters in Physical Therapy.  Currently, I continue to compete, co-coach with the OSU Tri-Club, coach privately, perform professional bike fitting, race direct the Good Samaritan Challenge  5k/12k and work full time as an outpatient physical therapist.


My advice for having a good race: do your home work, believe in your self and maintain balance in your life."

"I began racing triathlons nine years ago to support a friend trying to change her lifestyle, and was immediately enamored. Since then I have competed in many triathlons of all distances, with 2 ironman finishes, and also compete in bike racing and marathons. In 2008 I was

I thoroughly enjoy my role as faculty advisor to the triathlon club since I can watch and help others learn and progress in the sport. Additionally, I enjoy learning more about our sport through my work. I am faculty at the OSU College of Veterinary Medicine and I study the exercise physiology of horses and racing sled dogs. Quite frequently I review relevant triathlon research literature when writing about my furry athletes!first in my age group and 3rd overall in the Pacific Northwest Open Triathlete ranking. However, my favorite part of triathlon is encouraging others to participate and accomplish, hence my proudest moments are not podium moments, but include finishing side by side with my identical twin in her first triathlon, and supporting her to her first ironman finish last year (which included shouting encouragement as I swam by her side!).

Triathlon offers wonderful things including good health and the camaraderie of training with and learning from others in the sport. Our club offers a unique support system for triathletes of all abilities and experience, including emotional and technical support during training and at races, and technique instruction and sage advice from our very experienced coaches. We welcome you!"

"I started my first triathlon when I was 27.  At the time I thought that I would do one sprint race, to say I had done it, and never do another.  When I started training I couldn’t run a mile without walking and I wasn’t able to swim an entire lap without stopping to rest at the opposite end of the pool.  I thought people who ran marathons were crazy and had no idea what an Ironman entailed.

Since that time, I have run 10 marathons, done 3 ironmans, and numerous half ironmans and sprint tris.  I have never been at the front of the pack, but always enjoy racing and compete against myself to better my performance with each race.  The highlights of my racing have been qualifying for the Boston marathon and having my family and friends cheer me on at IM Coeur d’Alene."

My advice for having a good race: "Stay positive and focused on your goals.  Give the best effort you can give, without worrying about what anyone else is doing."

"I love everything about triathlon and the multisport lifestyle, so much so that I have focused my entire life around it. When I joined the Triathlon Club in 2004 as a Sophomore at OSU, I had only done 2 sprint triathlons. The club was a great place to learn and grow. I became the web and apparel officer for several years. When I returned to OSU for graduate school, I served as president of the club for 4 years and race director for 3. I wanted to give as much back to the club that help shape the direction of my life and studies. I discovered my love of race directing when I directed the Beaver Fever in 2013 and Beaver Freezer in 2014/2015.  I now have a masters in Exercise and Sport Science and am working on a PhD in Kinesiology at OSU. I also help Blair run Best in the West Events. I love being a coach for the Beavs, it is so rewarding to be able to advise and give back to the students and the club that means so much to me. I want all of our athletes no matter what the speed or background to achieve their goals, make new friends, and have a great time participating in this fantastic sport!"

My advice for having a good race: "Put in the work during your training, practice your nutrition, and don’t take yourself too seriously. When you toe the line on race day, the hard work is in the books and it is time for you to see what your body can do and enjoy yourself because you get to do triathlons! Try to smile (scientifically proven to make you faster ;-) and thank volunteers, high five other racers, and be flexible if things don’t go according to plan." 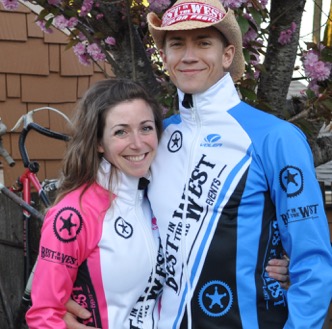 ‹ Meet the Team up Workouts ›